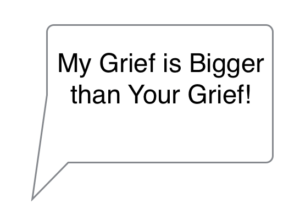 The comparison of grief. It doesn't work. Although I find it happens often.

"I know just how you feel about your son." My neighbor began. "The other morning I was out front with my dog and I loved that dog. I saw the car coming and shouldn't have called him. He was across the street and in the neighbor's yard and I called him at the wrong moment and he ran right in front of the car. I felt so bad. I totally cried."

I stood there and I am pretty sure my mouth must have dropped open at some point. Did this guy just compare his dog to my 22-year-old son? I walked away feeling differently about him.  Mostly, I just didn't get it. Emotionally I felt angry. I felt like he was stupid. Logically, I knew he was a pretty good guy and was simply wanting to connect and let me know he felt bad for me.

Comparing grief doesn't work. Many of my friends and even strangers have said things like my neighbor said to me.  I love my friends and I know they are making feeble attempts to connect with me and let me know they understand. The point is, they don't. They don't understand and I hope they never do understand. My grief is not better than their grief. Their grief is not better than mine. It isn't about comparing emotions.

Trying to Box Grief and put it in a Neat Package

Grief is raw. Grief is personal. Grief is something that we make major attempts to define. As humans, we want to rope it in and contain so we can control it. We have even made a "formula" of the stages of grief. Bullshit. I have found it all to be bullshit. There is no formula. No pat answers. No typical. No normal.

Grief releases all emotions. When there is a loss, emotions won't be corraled. Even if they are stuffed, eventually, they will fester and come out. They will bubble up from wherever they were stuffed and create physical pain, emotional pain, drinking, drugs, or disease.

Grief reminds me of the movie, Clash of the Titans and the release of the Kraken. The Kraken. It was a monster that, once released, there was a possibility the Kraken could not be controlled.  Of course, the Kraken was always there in the depths, lying in wait. The Kraken could destroy the entire world if released and allowed to roam unchecked. This is grief. Also, if released, there is no way to know if it can be recaptured.

Grief is not just about the loss of form. It is about a loss of the relationship. A loss of future experiences. What makes it unique is the fact that those future experiences are made up by the griever. This is what makes it so personal. For example, who knows if Phillip would have ever bought a home. In my head, he bought a home and I was the one to help him buy it. This is one of many scenarios.

The Best Case Scenario of Death

As Eckhart Tolle says, all stories are failed stories. In the end, we all lose form. We all die. Suffering is inevitable, and how we respond to that suffering is our choice.

Getting Good at Grief

The only way to get good at grief is to experience it. It is not something for which you can prepare yourself. You can't get ready. There is no class on how to get ready. Well, maybe there is, I don't know. The point is, even if there was a class like that, it wouldn't work. The emotions must be felt. It is healthy. It is a huge part of life. It is the only thing we can all count on. We have 100% death rate in this world.

This is why comparing grief is difficult. It doesn't work. The truth is, my neighbors level of grief could possibly be as deep as mine. Perhaps the loss of his dog is a deep grieving process for him. I don't want to judge that. I also don't want it compared to my son and my grief.

What is the Answer?

The answer is love. It is aways love. Love can be a light touch. Listening. A warm hug. I have found that sometimes I just want a friend to listen. I want them to cry with me and realize that I have lost one of the great loves of my life. There is nothing to do. There is only a way to BE. Just BE with me. I will BE with you. Nothing else matters. My grief is not better than your grief, it is different. That doesn't mean we both cannot be experiencing the same emotions. We have all experienced loss. Let's BE with that and appreciate what we have in front of us NOW.