Published on 28 September, 2014 by philsmom in Articles by Michelle, Random Thoughts on Grief, Uncategorized

22 Year old boys have strange things in their apartments. It is just a fact of life. They collect beer bottles, whiskey bottles, music posters, old tennis shoes and trinkets. This is a stage my own husband sort of outgrew. I say “sort of” as just today he mentioned that he has his space for his stuff…which he then added is in his closet. I had put something in there that didn’t belong and he said, “Really? This is the only space I have for my “stuff”.” 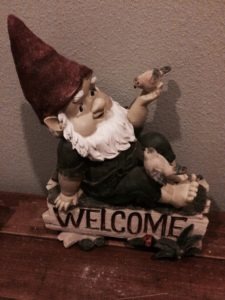 I did not realize that these things were such treasures to them. Perhaps the stuff my son collected was normal. His treasures were part of coming of age. The problem is, he didn’t get a chance to outgrow it.

The funny thing is, what I saw has a young mans junk, has now become my treasure. A stirring stick, the tiny umbrellas from a fruity drink he has somewhere and I am still shuffling the gnomes around my house. Yes, I said GNOMES. Gnomes have always been creepy to me. I remember seeing a Twilight Zone episode where the gnomes came to life and kidnapped the family and turned them into gnomes or something as the family was just GONE.  They showed the gnomes creeping around the lawn at night with their evil little laughs.

Now I have gnomes proudly (sort of) displayed in my home. Somehow this makes me feel closer to my son. They were his. He touched them. Enjoyed them. He picked them out and some of these things he even bought.

A Grieving Mother is Raw Emotion

Another thing 22 year old boys hold on to….or at least mine did, was cheap stuffed animals. Phillip had a big black bear and a cheaply stuffed dog that says Phillies on it. I am sure the pun on his name had something to do with ownership. Now I have this carnival trinket displayed in my home. What am I supposed to do with these things? Normally I could easily let go and yet….things have changed. 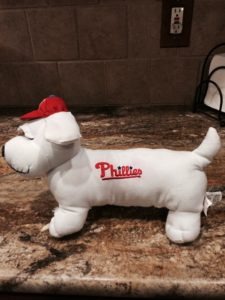 I have been purging my home of stuff. I want to simplify. I have been involved in personal growth for nearly 20 years and one thing I have learned is my environment is a reflection of my mind. Holding on to stuff and getting attached to stuff is an empty life. Just when I thought I had a handle on this concept my son dies and leaves me his stuff…the day before he died it was junk to me….the day after…treasure. I find myself replacing my $80 basket for gnomes. How can this be?

Significance is Assigned by Me

I know significance is assigned by me. This truly is a case of that! I have now put significance on these things. Somehow, if I have these things, it brings me closer to Phil. This cheap stuff that my 22 year old son had when he died. It has meaning to me now. I suppose I will keep it….I don’t know how long. As long as I need to.

No amount of stuff with bring my boy back. I have saved his clothes and his trinkets and yet, it is not even close to having him. It is a reminder of a mothers love….a reminder of how things used to be…the normal, ordinary day with my son.

I will do what I need to do to muddle through each day. As the blow softens, I glance up and see his trinkets proudly displayed on my potshelf and I think, I was a pretty lucky mom to have him. He was caring, loving and kind. He was a great hugger. He loved me and we had a special closeness that I have had with no other human being. I miss his smell. His smile. His laugh.

I will sit with this one for awhile. I will keep the stuff. Display it. Shuffle it. Someday perhaps I will pack it away or even donate it. Today is not that day. Today I will do what I have to do to remember my son.

Tags: Grieving Mother, Holding on is suffering, Loss of my son, significance is assigned by me, trinkets to treasure

« The Car that my Son Died Driving
I’m so lucky! »