Published on 2 November, 2012 by philsmom in Uncategorized

Ladybug, the name, was coined by European farmers who prayed to the Virgin Mary when pests began eating their crops. After ladybugs came and wiped out the invading insects, the farmers named them "beetle of Our Lady." This eventually was shortened to "lady beetle" and then "ladybug."

Before my grandaughter was born, my son and his girlfriend called their little baby, ladybug. Later it was shortened to simply 'bug'. So it seemed natural to not only me but to my other son Sam's girlfriend because we both bought little Ava a ladybug costume the very same day…nearly a month before Halloween.

Little Ladybug and her Halloween Costume 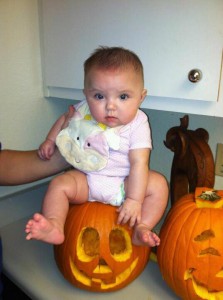 This year was her second Halloween. She was only four months old on her first Halloween and they did dress her up as the great pumpkin….it wasn't near as much fun as this year though. Oh how I wished Phil were here to see his little ladybug. The ladybug costume was a big hit and she truely fit the role of ladybug.

Lunch with Grandma and Grandpa on Halloween

She wore her ladybug costume most of the day and enjoyed going to lunch with Grandpa and Grandma. She flittered around the restaurant loving people. What I mean is, she waves at people and is very friendly…she is exactly the way her dad was at that age. It is almost spooky how much she is like him. I had four other children and none of them were outgoing the way Phil was. He was a true people person.

He used to open the door for the ladies.

This is a very vivid memory of mine…Phil was about three years old when he started this behavior and I don't think he ever stopped. It was before the automated doors we have now at the grocery store. Everytime we would go to the grocery store he would hold the door for all the ladies coming into the store and as we were leaving…on the way out. I used to wait for him and finally I would say, "Phillip, come on…we have to go." He would look at me like I was crazy and say, "But Mom, I have to hold the door for the ladies."

There were other times when he would help them load their groceries or carry their stuff for them. If anyone were to drop anything he was the first one there picking it up for them. He was a helper. Always helping. Supporting. A lot like his dad really.

He used to wave at people just like Ava does. He didn't know a stranger. As an adult, he worked in Circle K for two years and when he died people called and came out of the woodwork to tell me how they met him at Circle K and how friendly he was. One such couple came to our home and had gifts for the baby. They are both postal workers and they would stop every morning to get coffee. As they got to know him, they grew to love him. He had been to their home, they had bought gifts for the baby. He invited them to the house several times and always talked about how nice they were. He seemed to have a way of seeing the good in people. 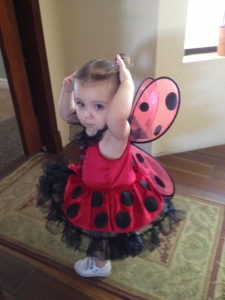 Paul and I had a babyshower at the house for Phil and Ezgi. They had a ladybug cake. I remember this being the first time I heard about their little nickname for the baby and I thought it was a great nickname and a great theme. The cake was amazing. Whomever baked it had created a masterpiece in my opinion.

In many cultures, ladybugs are considered good luck. Most people like them because they are pretty, graceful, and harmless to humans. But farmers love them because they eat aphids and other plant-eating pests. One ladybug can eat up to 5,000 insects in its lifetime!

I don't know about farmers and ladybugs, what I do know is I used to think I was here for the baby and now what I really realize is this little ladybug was sent for me. She is here for me.