He didn’t die in the Fire….he died before

He didn’t die in the Fire….he died before

Published on 18 September, 2012 by PhillipShelton in Uncategorized

Please read this article at your own risk. There are details of the fire and the accident in which Phillip was killed. The first part is the actual news article that appeared in both print and online. 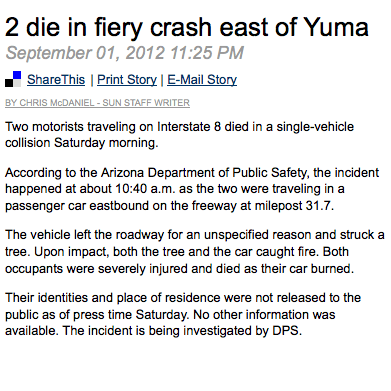 The Newspaper said, two killed in a fiery crash. When the police officers came to our door…I knew it wasn't going to be good news. I could see the serious looks on their faces and I didn't want Paul to answer the door. I heard the officer ask Paul, "Are you Mr. Shelton?" He replied. "Yes." Then I heard the officer ask, "Do you have a son named Phillip Shelton?"

Oh my God. At that point I heard him say something about a bad accident on I8. I became hysterical. Is he DEAD? Did Phillip DIE? I was yelling this hysterically.

I remember running into my daughters room and saying, Oh my God, Oh my God…over and over I repeadted it while I sobbed and held my stomach. She was shouting at me…MOM WHAT? What happened? MOM? I just kept saying Phillip, Phillip, Phillip.

I remember the look that came across his face. He said, "No Shelly, you can't do that." I didn't understand. Then he continued, "There was a fire Shelly, Phil is gone, he was burnt up in the car."

For several days I couldn't handle this information. My mind raced. I envisioned him pressed against the window yelling for someone to help him…scratching and clawing to get out of the pain of the fire. I wanted to reach into my body and rip out my heart so it would stop hurting.

I miss you Phillip. I am not sure how to get along without you. You have been such a part of my life for so long. Your boots still sit inside my back door. It sort of seems like you might come back if I leave them there. I know you will need them for work.