Published on 5 October, 2012 by philsmom in Uncategorized

When Phil was little he was extremely obedient. He didn't always like being obedient, yet, he would comply with what his mother wanted.

When the kids were little I used to tell them that happiness was an inside job. I had learned with my oldest daughter that making them sit in timeout for a specific amount of time didn't work so, I came up with the idea that they were in charge of the time frame they had to sit.

In other words, they were able to decide how long it took them to switch their beingness from mad to happy. The rule was they had to sit in timeout until they decided to be happy, however long that took…it was up to them.

Phillip was so cute. At 18 months old he had it down pat. He would start to have a fit and I would say, "Go sit until you are happy." He would go around the corner for about ten seconds and then come back around the corner with a huge smile on his face and his arms up and he would say…"HAPPY".

I saw him do this in his life too. As an adult he would get upset about something and then he would shift. I even noticed the mother of his child texted me the other day that she was having a bad day and she had "shifted" to happy. 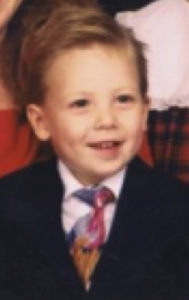 The last time I saw Phillip, Paul, Josephine and I went to his new apartment. He had the baby there and Paul and I were dancing with her and being silly. At one point she started to fuss and I said, "Oh no, you have to sit until you make yourself happy." I then sat her down against the wall and Paul and I kept dancing…she quickly adjusted her attitude and Phil said, "Mom, you have to teach her that!"

I suppose I could learn a lot from my baby Phil in this…if an 18 month old can shift and make himself happy, why can't I? Why not now when I feel at my lowest. So I practice this each day. I feel sad and then I shift. I am learning to make myself happy. I also know it is going to take some work as I have a huge loss that has occured in my life and I am getting new tools through a couple of programs I am doing. The tools will help of course, yet, I am certain the number one tool I have is the memory of my beautiful Phil at 18 months old coming around that corner saying, "Happy Momma."

Boy I miss him. I sure do. I can still smell his baby smell from long ago. Another day without him and I go on. I will teach the baby to make herself happy…for it is what he said he wanted.

« Ramblings After the Death of a...
Not a Fan of Saturdays »